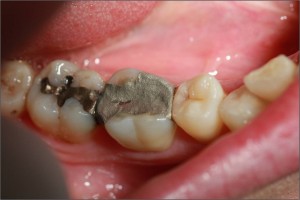 Amalgam fillings containing mercury were first used about 180 years ago and from the start, quite rightly, concerns were expressed about their safety. I am sure we have all been exposed to the controversy; the media and the internet have made a meal of it. Despite the lack of conclusive mainstream scientific evidence one way or the other some countries have banned amalgam and others have discouraged its use in pregnant women and in children as a precaution.  While on the other hand the American, the British and Australian dental associations have declared the use of amalgam safe to use on patients but concern for the environment still exists for its waste disposal. This confusion in the public’s eye has led to many people seeking the removal of their existing, sound amalgam fillings and their replacement with other materials.  Largely with composite resins much to the delight of the dental industry.  Metal and amalgam free practices have shot up all over the place. Composite fillings cost more than amalgam and have only about half their lifespan, so from an economic and a clinical point of view they are far from the ideal substitute for amalgam.

Bisphenol  A (BPA) is a synthetic ‘plastic’ material which is commonly used in the manufacture of food and drink containers.  Unfortunately, our lovely new white composite resin fillings and fissure sealants may also leach BPA into our systems.  Again as with the evidence on amalgam, nothing is proven yet but it is still early days as far as the mainstream research goes.  The evidence suggesting the potential for harmful health effects from BPA is rising rapidly, especially for the developing child. The big unknowns are:  1)  which are our main sources of BPA exposure?  and  2) do dental materials in particular leach enough BPA to pose a risk?  Already some countries have banned the use of BPA containing plastics in the manufacture of baby’s bottles, again as a precaution rather than from irrefutable evidence.

Now before you go rushing off to have your white fillings replaced remember nothing has been proven yet. If you do need to replace defective fillings in the near future, what do you go for? In children’s deciduous (milk) teeth there is the option of the glass ionomer  cements (GIC)class of materials which so far don’t appear to have had any bad press. The problem for adults is that GICs do not wear very well on surfaces that take the biting forces. They also do not have the wonderful aesthetics of the composite resins for the front teeth.  So it’s either go back to amalgams or go for indirect restorations like crowns and inlays. The cost of these is high relative to the direct filling materials (composite, GIC and amalgam). So, many of us would be economically excluded from this option. No doubt the manufacturers of dental materials will come up with new alternatives but these materials won’t have any long term track records for safety and clinical efficacy. You could therefore be jumping from the frying pan into the fire trialing a new material.

Prevention is a whole lot better than cure

What would I do? I still have my amalgam fillings from the 1960’s, so I will be hanging to them, thank you very much. I haven’t had a new filling in 30 years which shows how reliable amalgam fillings can be and how a little prevention goes a long way. The bottom line, take away, message of all this is; if this stuff scares you then the best thing you can do to is to employ a simple preventative regime.

1. Learn how to brush your teeth correctly and do it twice a day, morning and night, with a fluoridated toothpaste and instead of rinsing out the toothpaste after brushing just spit out leaving some toothpaste in the mouth.

2. Learn how to floss correctly and do it once a day, preferably just before brushing.

3. Reduce the frequency of sugary foods and drinks, switch to sugar free wherever possible.