Rhinos and elephants an ingenious plan to save them

Before you read this about saving the rhino please view the video in this link; I need you to be angry and sad while you are reading. https://www.youtube.com/watch?v=dlRFSIyBqLc 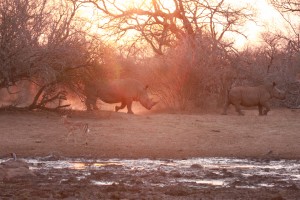 My name is Matt Erasmus I was born in Zimbabwe, Africa a long time ago. I grew up in the African bush, so it is a part of my soul, that is a fact and there is nothing I can do about it. Enough about me, this is all about us saving the rhino and elephant in their natural habitat. I have a cunning plan, which needs your help, I will explain in a moment.

First I want you to try and imagine Africa without the big 5 (in case you don’t know that is elephant, rhino, lion, leopard and buffalo). Without the animals Africa is no longer Africa, it will lose its mystery, its charm, its brand or trade mark. Why would anyone want to visit us anymore?  With no tourists many African livelihoods would be threatened and the livelihoods of future generations of Africans. So by saving the animals we are in fact saving Africa for its people. There is no point spending money only helping the people of Africa because without the animals Africans have a bleak future.

I can tell you now that the people of the far eastern countries who support the illicit trade in rhino horn and ivory are not going to stop demanding it until the last rhino and elephant has died. It is part of an ancient culture which is not going to change any time soon. It doesn’t   help, however, when a politician in one of those countries publicly claims that rhino horn cured him of cancer, thus openly supporting this illicit trade. It makes no difference to the users of these products that there is absolutely no scientific evidence supporting the efficacy of these traditional remedies, using ground up toe nails would be as effective, they are made of the same stuff. Take the example of Japan and its whaling  industry carrying on in the face of massive international condemnation. So we are not going to curb demand in these products in the foreseeable future no matter how much we pressure these nations.

Similarly catching poachers is only a short term solution which can buy us a bit of valuable time while we work on a lasting solution. In fact  catching poachers will  negatively affect the supply side of the equation which will stimulate demand and increase the price of horn and ivory making poaching an  even more attractive profession. It is like taking aspirin for cancer pain, it may help for a while but you know it is short term and the pain will return because the cancer is still there. In this case the cancer is the traditional demand for these products and the only means we have of treating this cancer is to satisfy the demand without killing the animals.

Now before I unveil my plan I need tell you the story of the Bahrain pearl industry. From ancient times, as far back as 2000 BC, Bahrain has been famous for high quality natural pearls and up to about 1930 the pearl industry was the cornerstone of the economy, employing 30000 pearl divers. So what happened in the early 1930’s to change this? The emergence of the cultured pearl industry in Japan, happened, which flooded the market with cheap pearls. Bahrain’s pearl  industry collapsed within a few years; fortunately for Bahrain that was when oil was first discovered. The pearl industry never recovered and to this day it is illegal to trade cultured pearls in Bahrain; a lot of good that has done.

I propose to collapse the poaching industry in a similar fashion by satisfying demand with cheap, plentiful and legitimate cultured rhino horn. Do I think it will work, I am damn sure it will work , the case of Bahrain’s pearl industry provides us with the perfect ‘experimental’ economic model. Can we culture rhino horn? The short answer is yes, we are in the age of organ culture, if a man can grow a new nose on his forehead then with a bit of research I am sure we can grow 2 or 3 rhino horns on a cows head.

We will need to change the political thinking a bit to allow free trade in rhino horn and ivory I am sure this is also achievable. If the cultured products are indistinguishable from the real thing and a lot cheaper; the current smugglers will be able to buy it over the counter and have no need to pay poachers. Voila no more poachers, job done.

So how do we achieve this? This is where you come in we need to get this idea to the politicians and the philanthropists out there. For this to work we need people with money and or influence to help set up a research and production facility and we need help from politicians to legitimise this new industry. Unfortunately we don’t have a lot of time so I am begging you to send this link to everyone you know and if some of you out there have the ear of some influential people, get this to them please. We need  their help to make it fly. 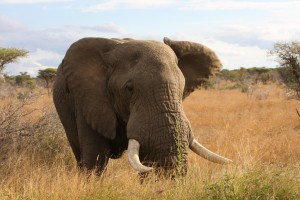 It doesn’t need to be an African country that sets this up but it would be nice and appropriate if it was. There may even be spin offs from this venture like advances in medical research and the development of a new industry creating jobs and earning money for investors. If our eastern clients won’t stop using  these products lets give them what they want and take their money and use it to save the animals. To me it’s a no-brainer, everybody wins.

Another short term measure which could buy us a bit more time is to farm  these animals and safely harvest part of their horn and tusks to satisfy the demand for a while. This should bring down the price and if we keep up the anti-poaching drive the risk/reward ratio of poaching would be tipped to more risk for less reward. The animals which had already been harvested would also be less attractive to poachers. We could farm these animals anywhere on the planet with space and a suitable habitat; the Americas and Australia for instance.

Although I would love to be involved in this project I don’t profess to hold title to this idea, this is for all our sake’s so if anyone out there wants to take the ball and run with it, be my guest and go for it. I am willing to help in what ever way I can, we do, however, need to all pull together for this to work effectively. If you need to contact me leave a comment below and I will get back to you. Thanks for your help.