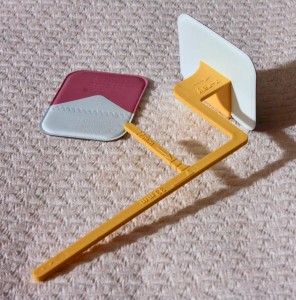 The most commonly used units  to measure the biological impact of radiation are  milli or micro  Sieverts. (mSv or µSv) where 1 Sv is the amount of radiation delivered over a short period of time that would result in radiation sickness, this is equivalent to about 300 years of background radiation. Previously the unit ‘rem’ was used and 100 rem = 1 Sv. You can appreciate that a 1 Sv is a massive dose and hence the use of mSv (1000 th of a Sv) or µSv (1 millionth of a Sv) as more practical units.

Possible Sources of exposure to radiation for the average guy

How much radiation is safe?

The answer is another question; who knows? Some environmental protection agencies claim that any dose above the background radiation carries risk. This may be true but with the population moving around the country and the globe what do you set background radiation at? In addition ongoing studies on the health of people living in the high radiation area of Ramsar (Iran) at this stage show no increase in cancers and may even demonstrate a physiological radio-adaptive response to chronic radiation exposure. In other words our bodies may be able to adapt to increases in background radiation. This is not surprising since background radiation has been present since the beginning of time and we therefore we evolved in its presence.

Consider then the risk associated with a couple of  bitewing dental xrays once a year as part of a check-up and let us throw in a couple more for good measure that’s a total of 4 conventional high speed xrays per year. This will set you back about 5 µSv (less if digital xrays are used). That is less than 1 days background radiation and much less than a 5 hour flight. Now if that scares you then don’t look into radiation from household appliances, mobile phones or granite counter tops.

I agree that xrays should only be used when there is a definite need but I would not lose any sleep if your dentist needs to take a couple of diagnostic xrays. When you consider that the ‘safe’ limit for radiation workers is set at about 20000 µSv/year above background radiation and airline crew about the same then the 5 µSv per year from dental xrays pales into insignificance. The increased risk to health from dental xrays in the normal course of events therefore appears negligible; you probably have a better chance of winning the lotto .